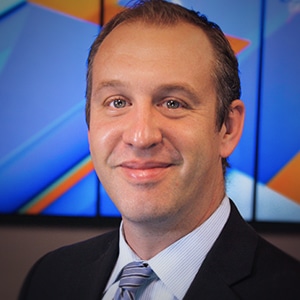 Born in Tennessee, raised in Arkansas, and now a resident of Mississippi, Ryan Mahan is proud to be a Southerner and to belong to this community. A former student of Millsaps and a graduate of the University of South Alabama, he now has a Bachelor of Science in Meteorology with a focus in Broadcast. Ryan’s passion for weather began in 2005 after witnessing the destruction that Hurricane Katrina had on his family and home. With nothing but a point-and-shoot digital camera in hand, he walked miles up and down the Coast to document the tragedy and its effects on the area and people around him. Using social media, he posted the photos and the stories behind them. The reaction from his peers inspired him to pursue a career doing what had up until then been a hobby. He loves working for WXXV because he feels it is the best opportunity he has to connect with the locals to whom he delivers the weather. He truly enjoys sharing his knowledge with those curious to learn more, particularly young students who express an interest in science and weather. One way he shares his enthusiasm is by getting involved in the scholastic educational process; he has judged several science fairs, talent shows, and pageants at local coast schools. He can also be found visiting several elementary school classes, hopefully turning your children future meteorologists. Ryan is a self-proclaimed geeky nerd. He loves all things sci-fi, and can usually be found watching his favorite cartoons on Adult Swim or playing any one of his array of video game consoles. He says he’s lucky that his high-school teacher wife puts up with him. They have a small bevy of furry children, but he really enjoys spending time with his two nieces, Claire and Elly, the latter of whom has made a few appearances on the network alongside him delivering the weather. You can follow Ryan on the following social media platforms: Facebook: @wxxvmahan Twitter: @wxxvryan