The Mississippi Bureau of Investigation has confirmed that the suspect in the shooting of a police officer in Meridian has been arrested.

News outlets are reporting that Dante Marquez Bender was taken into custody in Ackerman, which is about 2 hours northeast of Meridian in Choctaw County. Bender was arrested at 10:30 a.m. after a multi-agency manhunt overnight.

Bender is accused of shooting Officer Kennis Croom after he responded to a domestic incident about 5:30 p.m. Thursday.

Originally from Tuscaloosa, Alabama, Croom, 30, is part of a family connected to University of Alabama football that includes an uncle, Sylvester Croom, who was an assistant coach at Alabama and in the NFL and head coach at Mississippi State University.

She also said Croom had come in on his day off to work a shift when the call came in at 5:20 p.m. about a domestic disturbance. After arriving at the home on 51st Street, Croom advised he had one person at gunpoint, then advised that shots were fired.

When the second officer arrived moments later, he reported that an officer, Croom, was down and the suspect had fled.

When officers entered the house, they found Brittany Jones suffering from gunshot wounds. She was pronounced dead at the scene. News outlets are reporting that Jones, who was pregnant, was Bender’s fiancee.

Croom was taken to a local hospital, where he was pronounced dead. He was taken to the State Crime Lab in Biloxi on Thursday night. Friday morning, he was taken to Jackson to the Organ Recovery Center, according to WDAM in Hattiesburg.

Bender was fired in January just a few months after being hired as a police officer in Newton, Chief Randy Patrick told the Associated Press.

“There was an altercation that happened off duty with a civilian at a Walmart in Forrest,” Patrick said. Bender also worked for the police department in Newton, his hometown, previously under a different administration, but the reason for his departure wasn’t immediately clear, said Patrick. 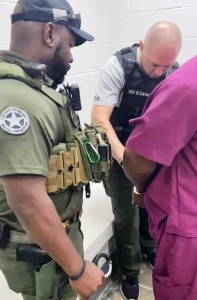 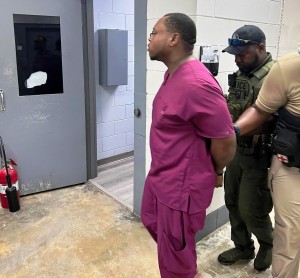 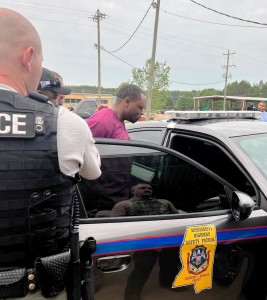 Dante Bender is put into a MHP cruiser to be taken back to Meridian after being caught in Ackerman. (Ackerman PD)