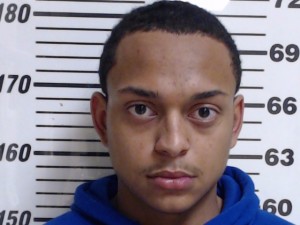 An 18-year-old is in custody, charged by Gulfport Police with leaving the scene of an accident causing death or injury in an incident on Wednesday afternoon near Hendry Road in Orange Grove.

Tyson Caden Presley is in the Harrison County jail under a $100,000 bond.

Officers were sent to the area after a report of a shooting came in about 12:40 p.m. When they arrived, officers found an unresponsive man in the middle of a parking lot.

Gulfport Police said Presley and three juveniles, — two 15-year-olds and a 16-year-old —  were in the area of Hendry Road for a narcotics deal. During the alleged deal, police said one of the juveniles grabbed the drugs and fled on foot and Presley drove away. The male subject grabbed the rear driver’s side door but lost his grip and fell, striking his head.

Presley fled the scene and did not stop to help the injured man or notify first responders.

Detectives found the vehicle shortly after, with Presley and the three juveniles inside.

The injured man was taken to a local hospital and is listed as critical.

Presley was taken to Harrison County jail and held in lieu of bond. The juveniles were charged with accessory after the fact and taken to the youth detention center.

We are urging anyone with information regarding this incident to contact the Gulfport Police Department at 228-868-5959 or Mississippi Crime Stoppers at 877-787-5898.