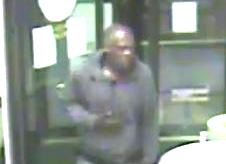 Biloxi Police are looking for a man who they suspect of stealing $1,700 in Saints gear from a store at Edgewater Mall.

In both incidents, the suspect was said to have left the mall in a 2003 gold Ford F-150 truck and was seen heading north toward the railroad tracks on Eisenhower Drive.

The truck has a dent on the passenger side of the tailgate and damage to the rear bumper.

If you know anything about this incident, please contact Biloxi Police at 228-435-6112 or ciu@biloxi.ms.us or Crime Stoppers at 877-787-5898 or mscoastcrimestoppers.com