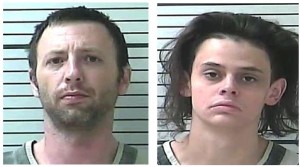 Two Waveland men are accused of possessing and dealing drugs near a school.

On Wednesday, Waveland Police used a search warrant on a house on Spanish Cove. Police believed the residents were producing and distributing child pornography and selling drugs out of the house.

During the search, officers found 25 electronic devices including cell phones, hard drive and computers, which were seized.

They also found methamphetamines and oxycodone.

Two men, Jack Anderson, 34, and Ty Feigel, 18, both of Waveland, were charged with possession of a controlled substance with intent to distribute within 1,500 feet of a school. Waveland Elementary is nearby.

Both are being held at the Hancock County jail without bond pending an initial appearance in court.

The investigation is ongoing and more charges could result from an examination of the electronics. Anyone with information regarding this case can contact the Waveland Police at 228-467-3669.