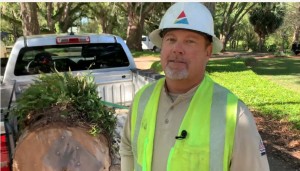 What’s the buzz? It’s National Linemen Appreciation Day. Who appreciates them? Most likely, a hive of bees rescued from a tree being trimmed in Moss Point over the weekend.

Mississippi Power was asked to trim an oak tree in Moss Point that had limbs hanging over some power lines.

Linemen went out to trim the limbs and found a hive of bees in a hollow limb. The tree had been struck by lightning about two years ago.

Patrick Chubb with Mississippi Power’s Environmental Affairs Department, called Paul Lee, one of the company’s linemen who also is a beekeeper, along with his father-in-law.

Lee responded to the area and helped the linemen section off the limb where the bees were housed and then cut it and bring it down safely. Lee then took the bees home to his apiary.