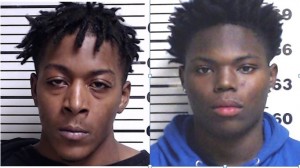 A drug deal gone bad landed one man in the hospital and another in jail.

Sgt. Jason DuCre’ with Gulfport Police Department said that about 2:31 p.m. on Sunday, officers responded to report of a shooting in the 12000 block of U.S. 49 at Classy Chassis.

Officers on scene found Jason McBeath suffering from a gunshot wound. He was taken to a hospital out of state, where his status was listed as stable.

Detectives learned during the investigation that Jacobe Jakeem Tyreek Hamilton traveled to the location to sell narcotics to McBeath. During the transaction, McBeath attempted to rob Hamilton of the narcotics and Hamilton discharged a firearm multiple times, striking McBeath, police say.

Hamilton was at large on Monday morning but has been arrested and charged with aggravated assault and his bond was set at $100,000.

McBeath is currently wanted and has an active warrant for armed robbery and his bond was set at $100,000.