Fight over a hat leads to shooting in Gulfport 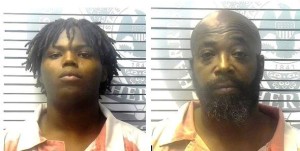 Gulfport Police on Saturday charged Jacobe Jakeem Tyreek Hamilton, 19, with three counts of aggravated assault and one count of possession with intent. James Demetric Triplett was charged with shooting into a dwelling.

Hamilton and Triplett were taken to the Harrison County jail. Hamilton was held in lieu of a $775,000 bond while Tripllet received a $50,000 bond.

The charges stemmed from an incident Saturday morning when Gulfport Police received a call of a shooting about 11:48 a.m. in the 13000 block of Trailwood Drive.

When they arrived, officers found a juvenile male suffering from a gunshot wound. He was taken to a local hospital was listed as stable.

Detectives learned that Triplett had taken a juvenile to confront another juvenile about a hat. The confrontation turned physical and then several people started brandishing firearms, police said. Multiple weapons were fired and two people were struck, as well as the residence where the incident occurred.