Full body view of the suspect.

Today at around 11:50 AM, the Gulfport Police Department responded to Courthouse Road for a report of a bank robbery.

When they arrived, officers spoke to witnesses who said a white male entered the bank and took out what looked like a gun.

The man then demanded money and fled from the scene. 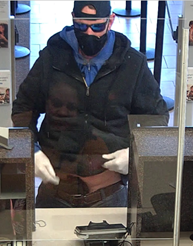 Picture of the suspect at the  front.