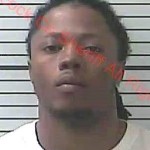 Waveland Police had made an arrest in the double-shooting that left a man dead on Thursday morning.

He is being held without bond pending an initial appearance that the jail record shows is scheduled for June 23.

According to a social media post by Waveland Police, Antwine W. James is also being sought in connection with the shooting. He should be considered armed and dangerous.

Reed is charged with the shooting two men who were found at a house on Hargett Street. One man died and the other suffered serious injury