Highs Monday will be similar to today, likely reaching the lower to middle 90s for most locations. Away from any thunderstorms that develop, temperatures are expected to warm into the lower and middle 90s across many areas with dew points in the mid 70s – making it feel very humid. Heat index values or “feels-like” temperatures will generally be between 98 and 103 degrees, but a few spots could be near or above the Heat Advisory criteria of 108. Temperatures tonight do not cool off much, only into the lower to middle 70s for most.

Temperatures will start out warm, then decrease by the weekend. Highs on Wednesday and Thursday are slated to be in the upper 80s to lower 90s. By Saturday, highs are likely to only top out in the mid to upper 80s inland and in the lower to mid 80s at the immediate coast. Inversely, low temperatures will begin cooler then gradually increase. This is due to drier air being present for midweek, then an increase in moisture from late week into the weekend. Lows Wednesday night will therefore be in the mid to upper 60s north of I- 10 and in the upper 60s to lower 70s south. 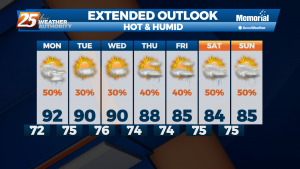 Guard units from Gulfport, Meridian to deploy to Florida