The fire was reported near South Saratoga and Thalia streets about 5:23 a.m.

At least six residents of those buildings escaped the fire and there were no reports of injuries, according to fire officials.

Extra manpower was brought in to protect neighboring homes, according to fire officials.

NOFD says one home has already collapsed and a second building has partially collapsed. A New Orleans fire official said embers from the fire caused the fire to spread to a roof of another building across the street from the initial fire.

Fire officials said the fire was contained by about 7 a.m. and firefighters are looking for hot spots to make sure it doesn’t re-ignite. 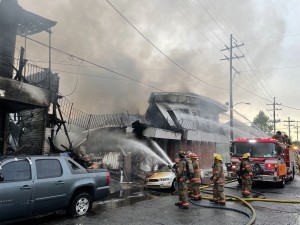