NEW YORK — June 10, 2021 — NBC’s 45th annual “Macy’s 4th of July Fireworks® Spectacular” tops off Independence Day with its world-renowned fireworks display and a cracking lineup of musical mega-stars. Chart-toppers Black Pumas, Coldplay, OneRepublic, Reba McEntire and more will light up the stage in advance of Macy’s iconic fireworks display on the canvas of New York City’s summer skyline. Additional performers and hosts will be announced at a later date.

The signature can’t-miss event of the summer will broadcast live on Sunday, July 4 (7-9 p.m. CST) on NBC with an hour long encore presentation at 9 p.m.

This year’s Macy’s Fireworks show will launch more than 65,000 shells and effects from five barges positioned on the East River centered in midtown, delighting New York City spectators and a nationwide television audience. The 25-minute display will feature dozens of colors and shapes, creating dramatic effects a mile across the river and from 1,000 feet in the air to the water’s edge. The musical score is the basis for the fireworks choreography and this year it salutes the hero within – the spirit of optimism and bravery of the American people. Classics such as “The Star-Spangled Banner” and “America the Beautiful,” featuring guest performances from The United States Army Field Band & Soldiers’ Chorus, mix with original instrumentals and a soaring rendition of “Lift Every Voice and Sing” by Broadway Inspirational Voices; creating a moving musical showcase for the pyro in the sky. The score for Macy’s Fireworks will also feature music superstar Tori Kelly singing a powerful rendition of Rodgers and Hammerstein’s classic “You’ll Never Walk Alone” from the musical Carousel. 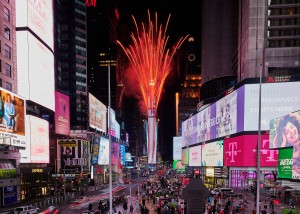 “It’s a point of pride for us at NBCU to partner with Macy’s for the fireworks celebration that is synonymous with the Fourth of July for countless families across the county,” said Doug Vaughan, Executive Vice President, Specials Programming, NBCU Entertainment. “Our lineup of spectacular performers for this Independence Day celebration could only possibly be matched by the fireworks we will see lighting up the sky.”

“As America commemorates Independence Day, we are thrilled to join the celebration with a spectacular Macy’s 4th of July Fireworks display honoring the heroic spirit of our nation,” said Will Coss, executive producer of Macy’s 4th of July Fireworks. “Live from New York City, five barges positioned on the East River will launch an epic celebration that will inspire a renewed sense of hope and optimism among our fellow New Yorkers and viewers nationwide.”

The “Macy’s 4th of July Fireworks Spectacular” telecast is a production of Universal Television in association with Macy’s. It is produced by Brad Lachman Productions with Lachman serving as executive producer. Bill Bracken is co-executive producer.

ABOUT BLACK PUMAS
Black Pumas is a Grammy-nominated band comprised of singer/songwriter Eric Burton and Grammy Award-winning guitarist and producer Adrian Quesada. The Austin, Texas based duo released their self-titled debut album Black Pumas in 2019, which racked up millions of streams and won overwhelming critical praise and multiple sold-out tours across North America and Europe. The release of Black Pumas was followed by an incredible breakout year, crowned by the duo’s Grammy nominations in 2020 for Best New Artist and in 2021 for Album and Record of the Year. Their anthemic single “Colors” – nominated for Record of the Year at the 2021 Grammys – hit #1 at AAA Radio and has been streamed over 176 million times across all platforms.

ABOUT COLDPLAY
Coldplay formed in London in late 1997. The band have gone on to become one of the planet’s most popular acts, selling more than 100 million copies of their eight Number One albums, which have spawned a string of hits including Yellow, Clocks, Fix You, Paradise, Viva La Vida, A Sky Full Of Stars, Adventure Of A Lifetime, Hymn For The Weekend, Something Just Like This and Orphans. In May 2021, the band released a new single, Higher Power, which received its first play on the International Space Station by French astronaut Thomas Pesquet and has since topped sales and airplay charts around the world.

ABOUT ONEREPUBLIC
Grammy nominated OneRepublic, is comprised of singer/songwriter and lead vocalist Ryan Tedder, guitarists Zach Filkins and Drew Brown, bassist and cellist Brent Kutzle, and drummer Eddie Fisher. The band released their debut set Dreaming Out Loud in 2007. The release included the multi-platinum-selling smash single “Apologize,” which shattered digital sales and airplay records worldwide and received a Grammy Award nomination. The band’s sophomore album, 2009’s Waking Up, produced the hit singles “All the Right Moves,” “Secrets” and “Good Life.” The certified-platinum album Native followed in 2013, featuring the No.1 hit and 33 million plus-selling single “Counting Stars,” along with a worldwide tour. OneRepublic released Oh My My, their fourth full-length album in 2016. During the spring of 2019, the band released “Start Again ft. Logic,” a song featured on the soundtrack for the Netflix drama 13 Reasons Why and “Connection” which was part of FCA’s Summer of Jeep campaign. Most recently, OneRepublic released “Run” off their upcoming album, Human. In 2020, the group released “Lose Somebody” with Kygo and “Wild Life”, which appeared in Disney+’s original movie, Clouds. OneRepublic has amassed 5B streams on Spotify to date. OneRepublic’s tracks, “Rescue Me,” “Somebody To Love”, “Wanted”, “Didn’t I”, and “Better Days” from their upcoming album, Human, are out now.

ABOUT REBA MCENTIRE
Multi-media entertainment mogul Reba McEntire has become a household name through a successful career that spans across music, television, film, theater and retail. The Country Music Hall of Fame and Hollywood Bowl member has won 16 ACM Awards, 15 American Music Awards, 9 People’s Choice Awards, 6 CMA Awards, 3 GRAMMY® Awards, a GMA Dove Award and was a 2018 Kennedy Center Honors recipient, in addition to multiple philanthropic and leadership honors. Reba has celebrated unprecedented success including 35 career No.1 singles and selling over 56 million albums worldwide. Reba recently earned her 60th Top 10 on the Billboard Country Airplay chart, extending her record for the most Top 10 hits among female artists. The Oklahoma native and Golden Globe® nominated actress has 11 movie credits to her name, a lead role on Broadway in Irving Berlin’s Annie Get Your Gun and starred in the six-season television sitcom Reba. Last year, Reba launched her very first Spotify original podcast, Living & Learning with Reba McEntire. Reba recently released the song “Somehow You Do.”