I-10 at state line closed after one-vehicle accident, fire 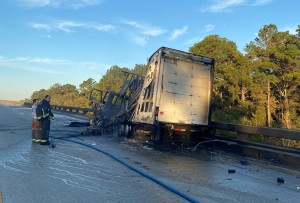 A single-vehicle crash and fire is causing traffic delays and road closures on I-10 near the state line. (MHP)

Motorists heading toward Louisiana this morning be advised, there is a major accident on Interstate 10 near the Louisiana state line.

Mississippi Highway Patrol spokesman Cal Robertson said the one-vehicle accident was set of the bridge at the state line and the driver escaped without injury. The crash happened just before 6:45 a.m., which was went MDOT issued a traffic alert.

Photos provided by MHP showed the tractor-trailer did catch fire, although that has been extinguished.

The incident is expected to tie up traffic for up to four hours, according to Mississippi Department of Transportation. MHP did tell us that the left westbound lane is now open, but motorists should expect lengthy delays until the scene is cleaned and cleared.

To make matters worse, Highway 90 in Pearlington is still closed while they work on the bridge over the Pearl River.