Mississippi’s largest public corruption case, in which tens of millions of dollars earmarked for needy families was misspent, involves a number of sports figures with ties to the state — including NFL royalty Brett Favre and a famous former pro wrestler.

At the center, though, is the former head of the state’s Department of Human Services, John Davis, who pleaded guilty on Sept. 22 to federal counts of conspiracy and theft and state counts of conspiracy and fraud against the government. Davis has agreed to testify against others in the case. Other people who have pleaded guilty to state charges include a mother and son who ran a nonprofit and an education company.

Here are the sports figures named in a civil lawsuit, which was filed on May 9, as well as the details from that suit, their responses if available and whether they’ve been charged.

The Hall of Famer, legendary Green Bay Packers quarterback, 1997 Super Bowl winner and University of Southern Mississippi alumnus is one of the celebrity centerpieces of the scandal — though Favre is not facing criminal charges.

The state Department of Human Services paid $1.1 million in welfare money to a nonprofit known as the Mississippi Community Education Center, which then paid Favre Enterprises twice for speaking engagements, “radio and promotional events and business partner development.” The idea was that the money would go toward a new $5 million volleyball facility at Southern Miss, which Favre was building and where Favre’s daughter was playing volleyball.

Favre didn’t make appearances and later repaid the money, though $228,000 in interest is still outstanding.

Texts messages made public in court documents also show that in July 2019, Favre texted with then-Mississippi Gov. Phil Bryant to ask if welfare money could be put toward building an indoor practice facility for the football team at the same school. That never went anywhere, with Bryant texting Favre in September that “we have to follow the law.”

Favre also is named in the lawsuit as the “largest individual outside investor” of biotech firm Prevacus (now called Odyssey Health) and suggested that the CEO ask about using Human Services grant money for investing in company stock. It turned into $2.1 million of state money for Prevacus and “corporate affiliate” PreSolMD.

Favre has not responded to the AP’s multiple requests for comment.

Ted DiBiase Sr. — the Million Dollar Man — was a fixture in pro wresting in the 1980s and ’90s with his gleaming, custom-made belt and “everybody has a price” catchphrase. DiBiase later became a Christian minister. He lives in Mississippi and owns Heart of David Ministries.

His son Teddy, who was a WWE wrestler in the 2000s and 2010s, lives in Mississippi and is connected to Priceless Ventures and Familiae Orientem, two limited liability companies based in the state. Brett DiBiase also lives in the state and owns Restore 2 LLC. Both brothers were pro wrestlers for a time.

The DiBiase ventures and the DiBiase men are all named as defendants in the lawsuit.

Heart of David Ministries received $1.7 million in welfare money “under (the) guise of providing ‘leadership training.’” The organization was ordered to repay about $722,000 in welfare money. The eldest DiBiase also received $250,000 through DiBiase Development Inc. to be a motivational speaker.

In a response to the civil lawsuit, DiBiase denied the state’s allegations and requested the suit be dismissed.

Teddy DiBiase received “over $3 million … in federal anti-poverty funds” over two years for things like “leadership training” through Priceless Ventures and supporting “the multiple needs of inner-city youth” through Familiae Orientem. None of the services were provided.

He also was given by Davis, who considered Teddy DiBiase a friend, the title of the human services department’s director of sustainable change, despite not being employed by the state.

The state told Teddy DiBiase about a year ago he needed to repay $3.9 million. In his response to the civil suit, DiBiase repeatedly says the allegations are “not directed” toward him and because he lacks “knowledge or information sufficient to form a belief as to the truth” of the allegations, he denies them.

Brett DiBiase, who also was a pro wrestler for a while, was an employee of the state human services department for about six months, ending in September 2017. After that, DiBiase was given a $250,000 salary paid in welfare funds from one nonprofit tied to Davis, as well as $130,000 in a separate payment of welfare funds from a different organization to “perform substance abuse training.” DiBiase also created his LLC and received $48,000 from MDHS for more training.

Davis also had welfare money funneled through a nonprofit to pay $160,000 for DiBiase to be a full-time resident at a luxury substance-abuse rehab facility in California.

In a July response to the civil suit, he said he is “not guilty of any act, fault, or want of care,” is “in no way liable” to the state and said he “had no personal knowledge of any false misrepresentations or sham agreements regarding illegal use of TANF funds.” TANF is Temporary Assistance for Needy Families.

Dupree was widely recruited as a high school running back in Mississippi in the early 1980s, ended up going to Oklahoma and was heralded as a possible Heisman contender, but left midway through his sophomore season and graduated from Southern Miss.

Dupree, who was the subject of an ESPN “30 for 30” documentary in 2010, had two seasons in the NFL and returned to Mississippi.

The president of the nonprofit Marcus Dupree Foundation, he was a “celebrity endorser” and “motivational speaker” for the main two nonprofits involved in the scandal. The lawsuit claims he was given “substantial amounts in TANF funds” but it did not specify how much. Mississippi Today reported he earned at least $100,000.

Separately, his foundation received hundreds of thousands of dollars — some of it TANF funds — that was used to buy a 15-acre property for himself and for “purported ‘lease’ payments” on that same property.

Dupree has not been charged and has refused to follow a state’s order to repay $789,534. In an ESPN report published Sept. 30, he denied the allegations in the lawsuit.

Lacoste was a linebacker at Mississippi State in the mid-1990s and played in the Canadian Football League for a year. He became a trainer and owner of a fitness business, and also is the president of a nonprofit called Victory Sports Foundation. Both he and the nonprofit are named in the civil lawsuit.

The suit says Lacoste “directly proposed” to Davis that his nonprofit should get a piece of the welfare money for doing “fitness bootcamps” for public officials — including current Gov. and then-Lt. Gov. Tate Reeves, who was a client of Lacoste, according to Mississippi Today — political staffers and other participants in October 2018. Victory Sports Foundation received $1.3 million for three bootcamps.

Lacoste, who has not been charged, filed a motion in July to dismiss to the lawsuit, claiming the state has “failed to state a claim for breach of contract.” Lacoste also said in filings that Mississippi “pleads a litany of improper, conclusory misstatements” of state and federal law that “lack pleadings of fact for support.”

The Northeast Mississippi Football Coaches Association received $30,000 in welfare money in early 2019 as a donation “in consideration of … having Ted DiBiase Jr. as banquet speaker.” 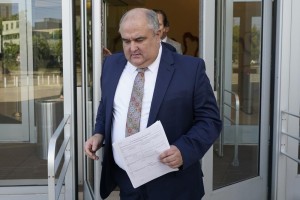 FILE – John Davis, former director of the Mississippi Department of Human Services, leaves the Thad Cochran United States Courthouse in Jackson, Miss., Thursday, Sept. 22, 2022. Mississippi’s largest public corruption case, in which tens of millions of dollars earmarked for needy families was misspent, involves a number of sports figures with ties to the state — including NFL royalty Brett Favre and a famous former pro wrestler. At the center, though, is the former head of the state’s Department of Human Services, John Davis, who pleaded guilty on Sept. 22 to federal counts of conspiracy and theft and state counts of conspiracy and fraud against the government (AP Photo/Rogelio V. Solis, File) 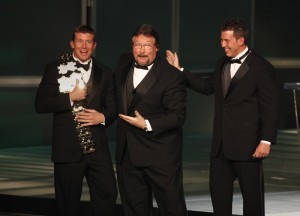 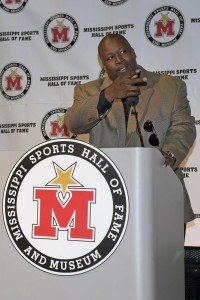 FILE – Marcus Dupree speaks at a press conference announcing his and five others induction into the Mississippi Sports Hall of Fame at the Mississippi Sports Hall of Fame Museum in Jackson, Miss., Thursday, Sept. 22, 2016. Mississippi’s largest public corruption case in state history, in which tens of millions of dollars earmarked for needy families was misspent, involves a number of sports figures with ties to the state. The president of the nonprofit Marcus Dupree Foundation, Marcus Dupree, was a “celebrity endorser” and “motivational speaker” for the main two nonprofits involved in the scandal. (Elijah Baylis/The Clarion-Ledger via AP, File) 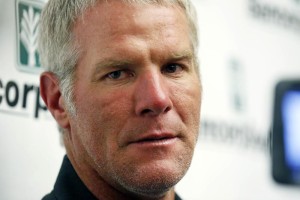 FILE – Former NFL quarterback Brett Favre speaks with reporters prior to his induction to the Mississippi Hall of Fame in Jackson, Miss., Saturday, Aug. 1, 2015. Mississippi’s largest public corruption case in state history, in which tens of millions of dollars earmarked for needy families was misspent, involves a number of sports figures with ties to the state — including NFL royalty Brett Favre and a famous former pro wrestler. (AP Photo/Rogelio V. Solis, File)