JACKSON, Miss. (AP) — A mother and son who ran a for-profit education company have pleaded guilty to improperly obtaining millions of dollars from the Mississippi Department of Education by submitting false documents about schools they operated.

“My office was proud to continue our work with our federal partners to help achieve this result in this case,” Mississippi Auditor Shad White said in a statement Thursday.

Mississippi law allows some public education money to be paid to private schools for students with special academic needs, but prosecutors said Nancy New and Zachary New submitted documents fraudulently seeking reimbursement for teachers’ salaries. Those included claims for teachers who no longer worked at the schools and claims that misrepresented other school employees as teachers.

Prosecutors said New Learning Resources fraudulently obtained more than $2 million from the state from 2017 to 2020.

The mother and son are among the people still facing state charges in the alleged misuse of federal money through the state Department of Human Services, in what White has called the largest public corruption case in Mississippi in the past two decades.

Nancy New and Zachary New were indicted in March 2021 on federal charges of wire fraud, aggravated identity theft, money laundering and engaging in monetary transactions with proceeds of specified unlawful activity with education money. They originally pleaded not guilty to all counts. Conviction on all charges would have carried up to 210 years in prison.

Nancy New pleaded guilty to one count of wire fraud, which court documents define as monetary transactions using proceeds of an illegal activity. She faces up to 10 years in prison, three years of supervised release and a $250,000 fine. A judge also could order her to pay restitution, and she could have to forfeit a Jackson home and any other assets bought with the fraudulently gained money.

Federal prosecutors filed a new charge against Zachary New on Wednesday, and he pleaded guilty to conspiracy. He faces up to five years in federal prison, three years of supervised release and a $250,000 fine. 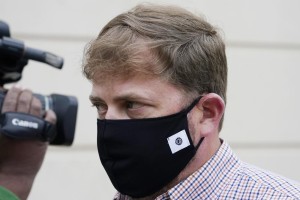