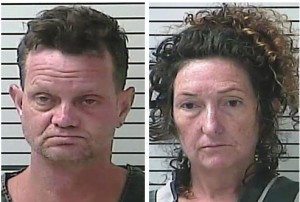 What started out as a call to Waveland Police about a possible drug overdose ended with two people in jail, charged dealing drugs.

Waveland Chief Mike Prendergast said officers were sent to house on Danube Street on Sunday evening about a possible overdose.

When they arrived, officers found a man and administered Narcan. The man was then taken to Ochsner Medical Center, conscious and breathing.

Officers got a search warrant for the house, where they found 10 grams of what they believe is methamphetamine, Fentanyl and a .38 revolver.

Both were taken to the Hancock County jail without bond pending an initial appearance. Both have court dates set for Aug. 11

Man accused of stabbing his father to death has died