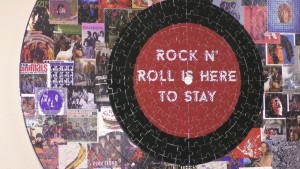 South Mississippi will have no shortage of Black Friday shopping going on this year, but also happening on the same day is Record Store Day. Marley’s Music in Biloxi is preparing to host their fourth event.

Owner Marley Roberts says Record Store Day is a national event that began in 2008, where independent record stores, like his, participate in by selling exclusive vinyl records that are limited in the number released by the artist. Albums for sale on this special day are old and new. While, doors don’t open until 8:00 AM Friday,  Roberts encourages getting in line early, because each record only has a limited number of copies available.

“We’ve had people show up at 1:00 AM to be in the front of the line. There have been times when Marley hasn’t gotten any sleep because he is just checking the cameras making sure everything is okay outside the shop,” says Marley’s music employee Sonja Miller.

“About the time we open, the line will be down the street, all the way to Howard, sometimes turning that corner. It’s always been really fun and we have deals on non record store day items, like used vinyl, CD’s and stuff like that,” says Roberts.

Marley’s Music has chosen a selection of vinyl records for distribution on Record Store Day. You can view the full list of at recordstoreday.com.