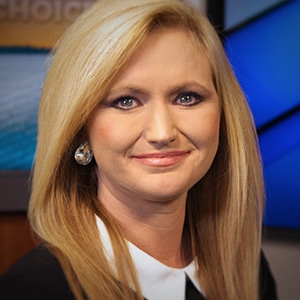 Toni started at WXXV News 25 in December of 2013, just three months after the news was launched. She has served as Assignment Editor, anchored for nearly two years, worked as a reporter for several years and hosted Coastal Connections for more than four years. Toni graduated Magna Cum Laude from the University of Southern Mississippi where she was editor of the Student Printz. She then did an internship on Capitol Hill, working for a U.S. Senator, then returned to Mississippi as a reporter at WDAM in Hattiesburg. After that, she moved to the Mississippi Gulf Coast, working as a reporter for FOX 25 in Biloxi, then crossing city lines to work at WLOX-TV news in Biloxi, starting out as a producer, then working as a photographer, reporter, weekend assignment editor and weekend anchor. She was among the station team that won the Edward Murrow and Peabody awards for coverage during Hurricane Katrina. Toni moved to the Lone Star State where she worked as the morning and noon anchor, investigative reporter and live shot reporter for KZTV Action 10 News, then KRIS TV News in Corpus Christi, Texas. Toni moved back to the Magnolia State to be with and take care of her family, working as a multi-media journalist and fill-in anchor at WDBD Fox 40 news in Jackson. After almost completing a second degree in filmmaking at the University of Southern Mississippi Gulf Coast, Toni transitioned back to news at News 25. Toni is blessed to have a wonderful support network of close family, friends and mentors, and she hopes to pay it forward. She has a three-legged chiweenie named Rocky Balboa because of his fighting spirit. She loves writing and has completed a novel that has been adapted into a screenplay, and has just finished another screenplay called “Delta Rose.” She’s currently working on a new legal thriller called “Fall From Grace.” Stay tuned….

National Day of Prayer event at the Jackson County Courthouse

Eight people in police custody, two on the run after multi-agency operation in Jackson County

Fixing up the Saenger Theatre in Biloxi

Less restrictions at the Seabee base to lead to economic boost

A ground-breaking achievement: The Salvation Army Community Center of Hope

Crawfish Music Festival still on this weekend rain or shine

Uptick in air travel as restrictions ease up and vaccines continue

Attendance is on the Upswing at Popular Gulfport Attraction

Warming Up at Downstage Productions Theatre in Gulfport for Shows to Take Center Stage Once Again: Little Women Set to Debut This Weekend