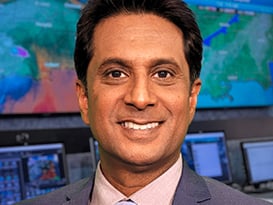 Chief Meteorologist Rob Knight is a familiar face along the Mississippi Gulf Coast, having been an on-air personality in the local area since 2005. Rob is originally from New York, but traveled and forecasted weather around the world as an active duty member of the United States Air Force since 1992. In 2005, after 13 years in the USAF, Rob made the transition back to the public sector as an on-air meteorologist, six months prior to Hurricane Katrina. Rob says “Meteorology is not a job for me, it’s my passion. I’m fortunate enough to have been in this wonderfully challenging field since 1992. I solve mysteries. The atmosphere gives you clues and you have to figure out what it’s going to do. How fun is that?” Rob holds a Bachelor’s degree in Meteorology from Florida Institute of Technology, along with several military degrees. He is also a member of the National Weather Association. When his attention isn’t focused on weather, it’s on real estate. Rob and his wife own a local realty. Rob loves to spend time volunteering in the local community, and often works with the Boys and Girls Club, the Humane Society, and several others. On a cool south Mississippi Saturday morning, Rob is usually at one of the many beautiful golf courses.